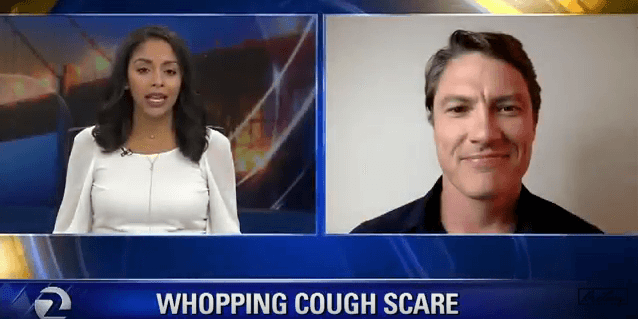 5 Things You Need to Know About Pertussis, or “Whooping Cough”

SF Fox’s KTVU asked me to comment on a story in the East Bay Times about a cluster of pertussis infections at Foothill High School in Pleasanton, CA, about one hour outside San Francisco. Here’s what you should know:

Pertussis is the name of the bacteria that causes whooping cough. The full name of the bacteria is Bordatella pertussis. This bacteria affects the lungs and upper respiratory tract. In the first 1-2 weeks of infection, it’s just like a cold — runny nose, cough, fever. But then it gets worse — with a terrible cough where kids cough so much in a row that they “whoop” to catch their breath, or vomit (called post-tussive emesis).

The little ones I’ve seen with this disease are miserable and can have a cough for more than three months, which is why pertussis is known to cause the “100-days cough.” This miserable and long cough is why we vaccinate against it.

IS IT ON THE RISE?

Since 2010, there have been increased pertussis cases, with over 9,000 in California that year (the most in 60 years) and 10 deaths. Analysis of the regions of breakouts has shown that communities with more vaccine exemptions (“I have religious reasons for not vaccinating my child,” etc.) correlate with outbreaks.

It appears that pertussis is up because vaccinations are down. This is preventable.

We can test the mucous in your respiratory system to get the diagnosis. I would be suspicious of anyone who develops cold symptoms (cough, runny nose) in the setting of exposure, such as this high school setting.

WHAT CAN YOU DO IF YOU HAVE BEEN EXPOSED?

Take antibiotics to prevent the infection; the regimen is the same as what we use to treat those infected.

I’VE HEARD THAT ANTIBIOTICS MAY NOT WORK TO CURE WHOOPING COUGH.

You are a smart one.

Once you are three weeks into the disease, which is often when you have the whooping cough and the post-tussive emesis, antibiotics don’t help, and the disease has to run its course.

How long can this be? 100 days — another reason that prevention in terms of getting vaccinated is important for this disease. Often, by the time we diagnose it, it’s too late for antibiotics to help.