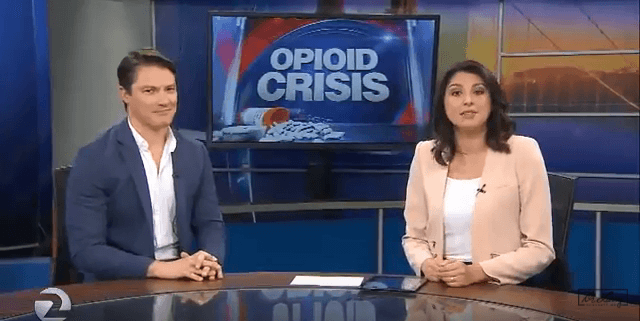 Can Public Access to Naloxone Solve the Opioid Crisis?

San Francisco’s Fox Station KTVU asked me to come in and demonstrate how to use Naloxone injection for opiate overdose, now that the Surgeon General has issued a recommendation for the public to use this to reverse overdose, in an attempt to save lives in this epidemic.

When we are talking about the opioid crisis, we are largely talking about heroin (most commonly injected) and prescription pain pills like Oxycontin and fentanyl. Less-potent pain pills but still in the mix include Norco, Vicodin, and Percocet. The opioid crisis does not include meds like Tylenol, ibuprofen (Motrin or Advil), or aspirin.

When someone overdoses on opioids, whether intentionally to kill themselves or unintentionally just to treat their pain or get high, the most lethal side effect is what we call “respiratory suppression” — they stop breathing. This happens in response to the amount, or dose, of the opioid. For example, 10 mg of Oxycontin is unlikely to cause respiratory depression in any normal-sized adult; however 1,000 mg is going to knock most people out and stop their breathing.

Naloxone is a reversal medication. I’ve used it countless times in the ER, often to figure out what’s going on. Drug overdose comes in, and we inject Naloxone (sometimes more than once). If the patient wakes up right after we give that medication, it becomes highly suspicious that some kind of opiate is involved in their case, because they woke up from the opioid reversal medication.

So the Dr. Jerome Adams thinking is that, if more people had access to this reversal medication — especially those around users (family, friends, workers, etc.) — then lives could be saved.  And the research supports this, so much so that the Surgeon General issued the first warning from the post in 13 years.

It’s a big deal. I’ll give some of my opinion below.

There are three ways to administer Narcan to an opiate overdose person:

In ED, we will give a dose, sometimes a 0.4 mg starting dose, but often we have to give repeated or many doses, especially if we are sure they are overdosing on heroin (especially if they’ve done it before or are known for using high doses of drugs). You might repeat the dose if you get little or no effect, and you really think this is opiate OD.

Narcan does not work for other types of overdose; ie., it does nothing for alcohol, Ativan, Valium, Tylenol, etc. It only works for opioid-based drugs like Oxycontin, heroin, Morphine, Fentanyl, etc.

There is evidence that making Narcan available to a community can reduce the rate of opioid deaths. Lives saved. Training the public in CPR, for example, can make a difference, so why not do the same for Narcan to reverse opiate overdoses?

There is one key word out of all of the above that I think will determine whether this intervention makes a difference, moves the needle and actually saves the lives it intends to:

KTVU asked me to bring in Narcan to demonstrate how to use it. So, I went to four pharmacies, including CVS, Safeway and Walgreens in Berkeley, California. Two pharmacies were small and had none in stock; it had to be ordered. The others that did have Narcan only had the nasal preparation, and it was anywhere from $99 to $150. None carried the autoinjector, and none had the generic, affordable, Naloxone available either.

I was even quoted $4,500 for the auto-injector Evzio, where Narcan comes in a pre-filled syringe that you only have to put a button to inject.

I came across an interesting NPR article which discusses how the prices of Narcan have skyrocketed recently. The cost in 2010 for a prefilled syringe was $10 for an ambulance to get the drug. It wasn’t that long ago that the generic Naloxone cost near $1. And now we are up to $150 for the nasal spray?

Again, of the four pharmacies I went to, there was a generic around $20. You would have to load the medicine yourself and inject the appropriate dose, which would take training for the lay public to know how to draw it up, where to inject, etc. Obviously, $20 is certainly more reasonable that $150.

But for this to actually work, this Narcan has to be available, which means affordable, and actually in stock in the pharmacies, neither of which it appears to be the case in Berkeley right now. For those two reasons, I’m skeptical about the reach of the Surgeon General’s plan, but I will give him a chance by putting it this way: He’s got some work to do.

The price has to come down. Who should pay for that? The federal government? Your health insurance? The drug manufacturer? Further, the big pharmacies of the world (CVS, Walgreens, etc.) will have to actually carry an affordable version of the drug. I saw an ad where CVS said they are making intranasal Narcan available for the uninsured by dropping the price from $125 to $95. Interesting. Seems to me that carrying the $20 version with a little teaching would go a lot farther to making this available, but there’s no money in that.

Lots of money to be made by a lot of different players in this deal. Time and politics will tell if this intervention is actually able to make the difference it is intended to. For the Surgeon General, and all the people who need this help, I hope it does.