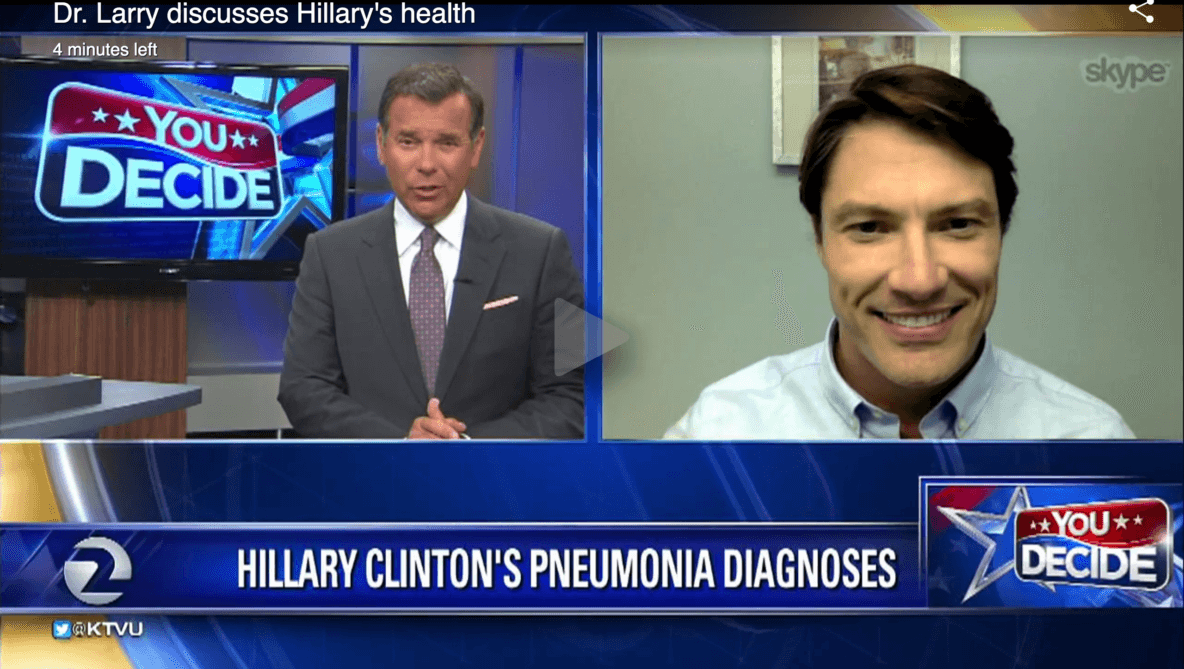 There are two pieces of facts from former Secretary Hillary Clinton’s doctor, Dr. Lisa Bardack, that you should know exist before we dive in:

“Secretary Clinton has been experiencing a cough related to allergies.  On Friday, during follow-up evaluation of her prolonged cough, she was diagnosed with pneumonia.  She was put on antibiotics, and advised to rest and modify her schedule.  While at this morning’s event, she became overheated and dehydrated.  I have just examined her and she is now re-hydrated and recovering nicely.”

Fox’s San Francisco KTVU asked me to comment on Hillary Clinton’s health given the events of the 9/11 weekend.  I’d like to review the facts. Click here to watch the interview

“Speculation is common in a casual media environment, and not something I am comfortable with.”

Second, she Mrs. Clinton still has the right to privacy.  So does every patient, in my medicalby law opinion.  Former Secretary Clinton She alone controls what information about her health she will allow her personal physician to speak on, and she will have to make her own decision weighing the American people’s desire to know how healthy their candidate for president is.

Her doctor is Dr. Lisa Bardack, who is chair of internal medicine of Mount Kisko Medical Group in Mount Kisko, NY, and has been Mrs. Clinton’s personal physician since 2001.  I have no reason to question her competence whatsoever.

On July 28, 2015, Dr. Barback wrote a 2 page letter detailing Mrs. Clinton’s state of health, and health medical history, which you can read below at link 1.  She Mrs. Clinton has seasonal allergies, and hypothyroid.  And She also has had a history ofhas had DVT in her legs, a concussion and transverse sinus venous thrombosis in the past, and presently isis on blood thinners for that nowas a result (Coumadin).  She Mrs. Clinton also takes a thyroid replacement pill.  I am not going to comment further on that particular letter, or Secretary Clinton’s health history, in this article, except to say I found it more detailed than I expected, down to a blood pressure of 100/65 with an LDL of 118.

Again, I want to re-emphasize that this information, private in nature, was released in 2015 by Ms. Clinton, her campaign and her doctor to the public.  Never in my career have I spoken publicly on a patient’s private health information, nor have I publicly commented on someone else’s medical history.  This is an unusual —this is a weird position, and appropriate that it prompts some feelings of discomfort.  I digress.  Dr. Bardack concluded the letter with the statement:  “She is in excellent physical condition and fit to serve as President of the United States.”

During a 9/11 memorial this past weekend, Mrs. Clinton left abruptly, and a video showed her requiring assistance to get into a van.  Speculation ensued.

“Secretary Clinton has been experiencing a cough related to allergies.  On Friday, during follow-up evaluation of her prolonged cough, she was diagnosed with pneumonia.  She was put on antibiotics, and advised to rest and modify her schedule.  While at this morning’s event, she became overheated and dehydrated.  I have just examined her and she is now re-hydrated and recovering nicely.”

Let’s talk about pneumonia for a minute.

Not all pneumonia is the same.  As a physician who has worked in the Emergency Department for over 7 years, I have seen hundreds of cases of pneumonia.  Pneumonia is when an infection in your lungs makes you sick.  Most commonly it is bacterial.  People commonly have fever and cough, but usually also feel generally weak and sicker than a cold.  Some cases of pneumonia are mild, and people can be discharged home on antibiotic pills like a Z-pak.  Some are more severe, where oxygen levels drop and patient’s need to stay in the hospital to get supplemental O2, or need the more effective IV antibiotics instead of pills.  They would be admitted to a medical floor.  The most severe cases of pneumonia can require mechanical intubation and ICU level care.  Pneumonia can be life threatening.

“She was diagnosed with pneumonia.” Without further information, I can only take this diagnosis on face value.

In the ED, I always have access to blood work and a chest X-ray.  An elevated white blood count and white patch on the CXR or “infiltrate” often signifies pneumonia, but you can diagnose PNA without these studies.  I do not have the facts on how the Fformer Ssecretary was diagnosed, and itsexactly the severity.

“While at this morning’s event, she became overheated and dehydrated.”

I’ve seen thousands of patients in the ER with dehydration, passing out, heat stroke.  This is exceptionally Very common.  Our bodies are mostly water, up to 60%.  Dehydration simply means it does not have not enough water or fluids.  And when we don’t have enough water, we can have problems like feeling weak, light headed or dizzy, even passing out.  To fix the problem, you just fill up the tank on fluids, either by drinking, or an IV bag of saline.

Now, iIf a person has mild pneumonia, and then gets dehydrated ian an outside event outside in humid, 80 degree weather, wearing a full suit, it would not surprise me that they might feel weak or even pass out.  As above with simple dehydration, just giving fluids, through an IV or drinking water or Gatorade, can make someone feel much better.  This is unlikely to be a sign of something worse or underlying, rather a combination of pneumonia plus circumstance.

Let me conclude with the following statement. With this limited information, there is nothing I have seen in this weekend’s events or Secretary Clinton’s medical history that makes me concerned about her future health.   As a doctor who has never examined her—that she may be unfit for the presidency based on her health.  That is a statement I am not qualified to make—Only Mrs. Clinton’s her personal physician can attest to that.  And Dr. Bardack, the chair of medicine, has repeatedly made that statement.

It’s important to me to comment on this as impartially as I can as a doctor.  I will do want to admit my bias as an independent, non-party affiliated voter, who leans left-center.

From my perspective, I would anticipate these events to get blown out of proportion both by the press, and by Secretary Clinton’s opponents.  That’s political, not medical.  Yes, we could certainly have more details about the Mrs. Clinton’s diagnosis and treatment of her pneumonia and dehydration (did they do a chest x-ray or blood work? Did she get IV fluids or antibiotics or just pills and water by mouth?, etc).  It appears she had a touch of pneumonia and was dehydrated.  I’m sure her health would benefit from a day off, as she has been working hard.

Questions that I don’t have answers for that came up for me as I was writing this:

What right does the American public have to know the medical history and documents of a candidate for public office, or the presidency?  How do we balance that with her right to privacy?

What in the world does the following statement even mean: “Fit to serve as President of the United States”?  What is the workup for that?  Blood work and a stress test?  How does a mental status exam or psychological assessment factor in?  This is a general question, not specifically directed at the former Secretary.  The “Fit for President” exam was not a lecture at my medical school.  I really have no idea what that even means.

Speaking of questions I don’t have answers to, how is Mr. Trump’s health?