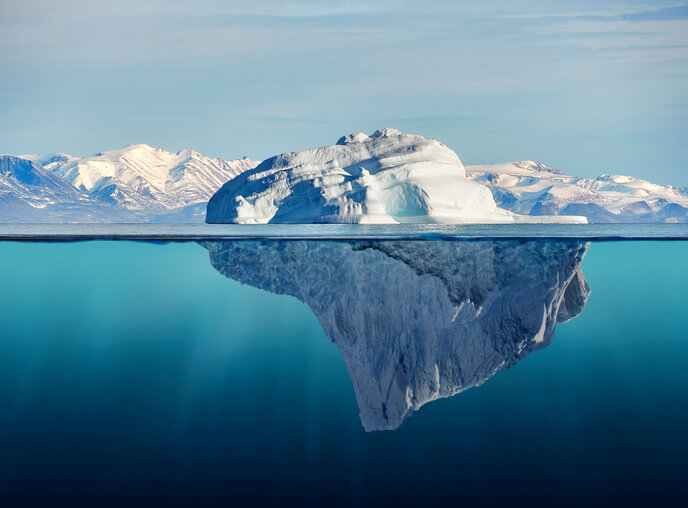 How Dr. Larry’s Icebery Theory Can Help You Lose Weight

Ever wondered why people yo-yo diet up and down with their weight — where they are able to lose weight only to put it all back on again, and then some? That phenomenon has fascinated me, mostly because I want to know what exactly the people who lose weight and keep it off do differently — so that I can make those habits or whatever they do available to everyone. Let’s focus on that.

This is a key concept and theme throughout my work, so I want you to pay attention here. I call it, THE ICEBERG THEORY.

IDENTITY (Beliefs about self)

We’re all familiar with an iceberg, right?  Well actually, we are more familiar with the tip of the iceberg, that little piece of ice sticking out above the water, when there is a huge hunk of ice beneath it. The tip of the iceberg is our APPEARANCE, what everyone sees on the outside; I also think of it as our results. Just beneath the surface is our behavior, which people don’t readily see. So, when it comes to our weight, for example, whether you are in great shape, overweight or obese, people can look at your body and get a pretty good idea of where you are at.

But most of the time, they have no idea what you are specifically doing (your behavior) in terms of diet and exercise that determines it. They can only see the tip of the iceberg.

Again, just beneath the surface is BEHAVIOR, which we can also think of as our habits.  It is our habits (yes, along with our genetics and environment) that determine our outcome, results or appearance.

When most people go on a diet, they focus on their behavior. Rightly so. Eating a certain way will give you results. If you eat fast food and pizza for every meal without any exercise, you are probably going to pack on the pudge. Going on a cabbage-soup diet or a trendy cleanse will likewise get your results — weight loss probably of fat, but also muscle and bone if you are essentially starving yourself. Whatever the diet, I think we can all agree that behavior (along with genetics and environment) determines what we look like.

Actually, I can think of an example where our behavior does not determine what we look like: plastic surgery. You can get liposuction to suck out the fat of your belly, back and thighs without changing a single habit.

Nonetheless, it is still unshakably true that behavior and habits determine results and appearance.

Over time, repeating a behavior over and over forms a habit. I would call the next level ABILITIES, or capabilities. Bodybuilders, for example, are masters of building muscle and burning fat. Being able to trim fat so muscles pop for a show — abilities that the average obese American has not developed (but could, in my opinion, by simply imitating the same behaviors or doing what they do).

Appearance, behavior and abilities are all controlled by the BELIEFS that underlie it, the next deeper level to the iceberg. If you believe that what you eat doesn’t matter, or that eating a Caveman diet (paleo) is the healthiest way to go, or that detoxes do good for your system — then that belief is going to lead to behavior and then results (appearance). Whatever your beliefs may be, my point is you cannot deny that beliefs lead to behavior; it’s really not the other way around.

Let’s get back to our original phenomenon: yo-yo dieting.  Now, you can also start to see, then, how more lasting change happens. It’s relatively easy to change your behavior: I want to lose weight, I am going to eat less and exercise more. But, as soon as you change those behaviors (i.e., as soon as you stop the celery diet and treadmill marathon exercise routine), your weight will go right back to where it was.

So what can we do to make those behaviors stick and turn into habits?

You work on the deeper level of beliefs.

For example, I used to drink orange juice because I thought it was healthy. When I later learned that it is just mostly sugar with minimal nutritional value, I was able to cut it out because I wanted to lose weight. Just like I cut out chips, processed bread and white rice as I moved from processed foods to whole grains (brown rice and sweet potatoes), fruits and vegetables. Those changes have become habits but grounded in the belief that Dave’s Killer Bread with 5g of protein and fiber per slice is healthier than white bread that has maybe 1 gram of protein/fiber, or that brown rice and sweet potatoes are healthy carbs that body builders use to build and maintain muscle.

This is not to say that I never enjoy OJ; I still love that tangy taste with bacon and eggs. But I don’t do it everyday, and I rarely do a large glass. And I rarely have white bread or white rice — that’s only if there are no other options, or I’m in a cultural setting where it would be inappropriate to refuse. When I worked in a hospital in Tanzania for a month, I was lucky to be fed and happy to have the white rice. But in my normal routines, I don’t do it anymore — because of my BELIEFS.

There is one kind of belief that is so important that it operates on a deeper level — beliefs about self, which we call IDENTITY. Let’s see how huge of an impact these can have.

In my teenage years and 20s, I believed that because I was naturally thin, I could pretty much eat what I wanted, and as long as I was active playing sports and exercising, it didn’t matter what I ate. This identity thought is similar to believing I was invincible — both illusions. But, look how the belief of eating whatever I wanted played out. When I hit my 30s and had a kid, my metabolism slowed down, my stress went up, and I birthed a guy — I put on weight. Maybe 15 pounds, nothing extreme, but I know it was directly related to thinking I was invincible when it came to my weight, metabolism and what I could eat.

It wasn’t until my identity changed, and I accepted that my metabolism had slowed and that large amounts of processed foods (like cereal, chips, pretzels and processed wheat bread) make me fat, that I was able to change for the long term.

Or, take Paleo. If you not only believe that Paleo is the best way to go but also see yourself as a Crossfit person, part of whose identity as a person is someone who eats that diet — this can be very powerful. That behavior change is much more likely to stick.

So, let me ask you: How might your beliefs, either about your weight or body in general, or about yourself (identity) be affecting your current body results? Let me share with you some of the profoundly powerful beliefs of some people I’ve worked with.

How does that deeply held belief, all the way down at the level of identity, affect this person’s weight? HUGE! Can you see why just changing their diet or adding a salad is NEVER going to be anything but temporary, if we don’t uproot this underlying limiting belief?

You can see how powerful belief and identity is to what we do (behavior) and our results in life, like our appearance. There is an even more profound level. When I work with someone, I love to dive into this deepest level of them all ASAP, because this is where the real permanent change (transformation, more like) can happen. Let’s just cut to the chase.

That’s the level of MISSION AND PURPOSE, what you are here to do on this planet. The spiritual realm, the deepest part of the iceberg — I imagine it almost all the way down, in the center of the deep blue rock of ice — is what ultimately grounds us and determines our destiny.

I remember talking with my sister about getting her kids to eat vegetables. Eating more vegetables probably won’t affect their appearance now, although they’d be healthier and down the road it would. But we can focus on each of the levels, the how-to do-it, what-to-cook — the more superficial levels of behavior and abilities, which are essential. I can share information about how every bite of vegetable daily pretty much helps you live longer according to just about every study ever done on it (beliefs).

But it wasn’t until I got to the level of identity — she’s a mother — and her mission and purpose to give her children the tools they need to be successful, healthy happy adults — then things got more exciting. Tapping into what is most important to her was so much more powerful than just lecturing about how delicious broccoli can be. Connecting that with her vision and mission of producing happy children — that is her deepest level. Let’s start there, right?

For me personally, when it comes to diet and exercise, my motivation to change and maintain behaviors is most powerfully connected to mission.  I’ll be blunt — I don’t want to be a fat doctor telling other people to lose weight. Credibility. And a big passion of mine, part of my mission on this planet, is to make it a better place, to inspire others. For me, connecting my behavior (diet and exercise) to that mission compels me, almost pulls me along — as opposed to me having to “will it” or force myself to follow a diet that sucks and some lame exercise.

Another big motivator for me is my daughter, more specifically one day she called me “fat,” and I was like, “Ah, hell no.”  I want to be (identity) a superhero in her eyes, and fat is not part of that identity. Like ever.

This is the iceberg theory: that the bottom of the iceberg (the mission/purpose and identity) is the key to lasting weight loss and getting off the roller coaster. More than just changing behaviors and picking up some information on healthy foods (both of which are essential) is digging deep and tapping into identity and mission, uncovering yours, connecting to it and then making everything else in your life flow from it (alignment). That is how you truly transform your life for good, for weight loss and anything else. And become that good looking tip of the iceberg for everyone to see.