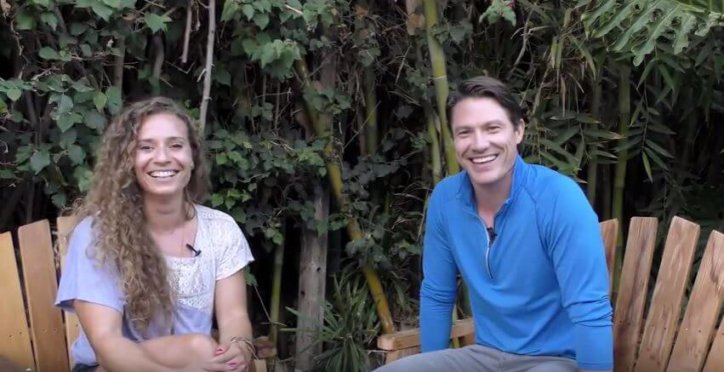 How Brittney Carbone Learned to Love Herself and Overcome Her Addictions

Brittney Carbone was always an active kid. Although her household was deemed “the house to go for junk food,” she stayed skinny by constantly playing sports and by the grace of a child’s high metabolism. Her family appreciated a healthy appetite; she could eat a pound of spaghetti for dinner and wear it as a badge of honor. There was no way she would be put on a diet because of the way she looked.

But when puberty hit early, things started to change.

“I started developing a little earlier than other girls, and that immediately made me uncomfortable,” Carbone said. “I was awkward, and I was no longer super skinny like the other girls. They were little girl skinny and I was becoming this woman.

For Carbone, that would be the tip of the iceberg for her descent into an addiction to alcohol and sugar that would change her life. Today a lifestyle coach and fitness model, she sat down with Dr. Larry to discuss recently losing 70 pounds, keeping the weight off and managing her addictions.

Brittney’s battle with alcohol and sugar

High school was when Carbone first began dieting to control the aspects of her life she was uncomfortable with. Quickly, that coping mechanism became alcohol.

At junior college, she played soccer (which kept her skinny, just the way she liked) but her dieting addiction never ceased. She began drinking more with her college boyfriend, and blacking out from too much alcohol became commonplace.

“If you didn’t black out, it wasn’t fun,” she remembered.

While she was clearly falling into a deeper addiction, she didn’t recognize it at the time. For her, it was all about having fun and taking the edge off of her stressful life.

But dieting and alcohol didn’t quite mix. Her life became a cycle of “be perfect, blow it all up; be perfect, fix it, and blow it all up again” — eating well during the week, getting drunk on the weekends and binge-eating once she was able to let her guard down. On the outside, everything was fine, but on the inside, she was seriously sick.

She began reaching out to online groups to talk about her addiction to alcohol, discovered the juxtaposition between how she looked and how she felt and decided to become sober when she was 22.

But, when she quit one addiction, another one reared its head to replace it — sugar. When she wasn’t able to pick up a bottle to confront her feelings, she found solace in food. Working in events, she hoarded leftover desserts in her hotel room for late-night binge sessions. And, once she started eating, she couldn’t stop.

How she began to love herself again

It wasn’t until she made a visit home to her parents that Carbone realized how bad things had gotten.

Shocked and humiliated into making a change, Carbone tried all sorts of quick fix diets. What they did to her body wasn’t important to her — just that they made her skinny. If she could just be thin, she thought, she would be loved and accepted again.

But, after gaining back all the pounds she had lost on dangerous fad diets, she realized that being healthy was the goal she actually needed to reach. Working with her health mentor, she tried something she had never done before: stop dieting.

Instead, she started writing everything she ate down — not just to hold herself accountable, but to take the judgement out of what she was eating, no matter how bad it appeared.

Today, 70 pounds lighter, she still writes down all of the food she eats every day, and adds in prayer and meditation to help her come to terms with her own life and to see love and tolerance in each situation. It’s still a process at times, but the intensity and duration of her emotional highs and lows are much smaller.

The only time my head shuts off is when I am connected to the earth. ? #LoveAndLight #Modeling #Gratitude #Peace #Breathe #Meditate #FlowerChild #Earth #Happiness #BrittneyCarbone

She still has trigger foods that she must avoid, because her addiction, while hidden, still exists. She said she’ll never know whether she will be able to just have one, or if eating that one piece will spiral her into another binge session. To prevent any slip-ups, she structures every meal of her day well in advance.

Knowing that her control issues cause her addictions, she tries to manage her own anxiety through her spirituality — and being able to accept that she’s not perfect.

“Sometimes we don’t get the things we want, and that’s okay,” she said. “There are things in my life that I was sure I wanted, and I was devastated.

“But looking back now, I’m just like, ‘Thank you, universe.’”

A photo posted by Brittney Carbone Fitness (@brittneycarbonefitness) on Oct 9, 2016 at 6:04am PDT