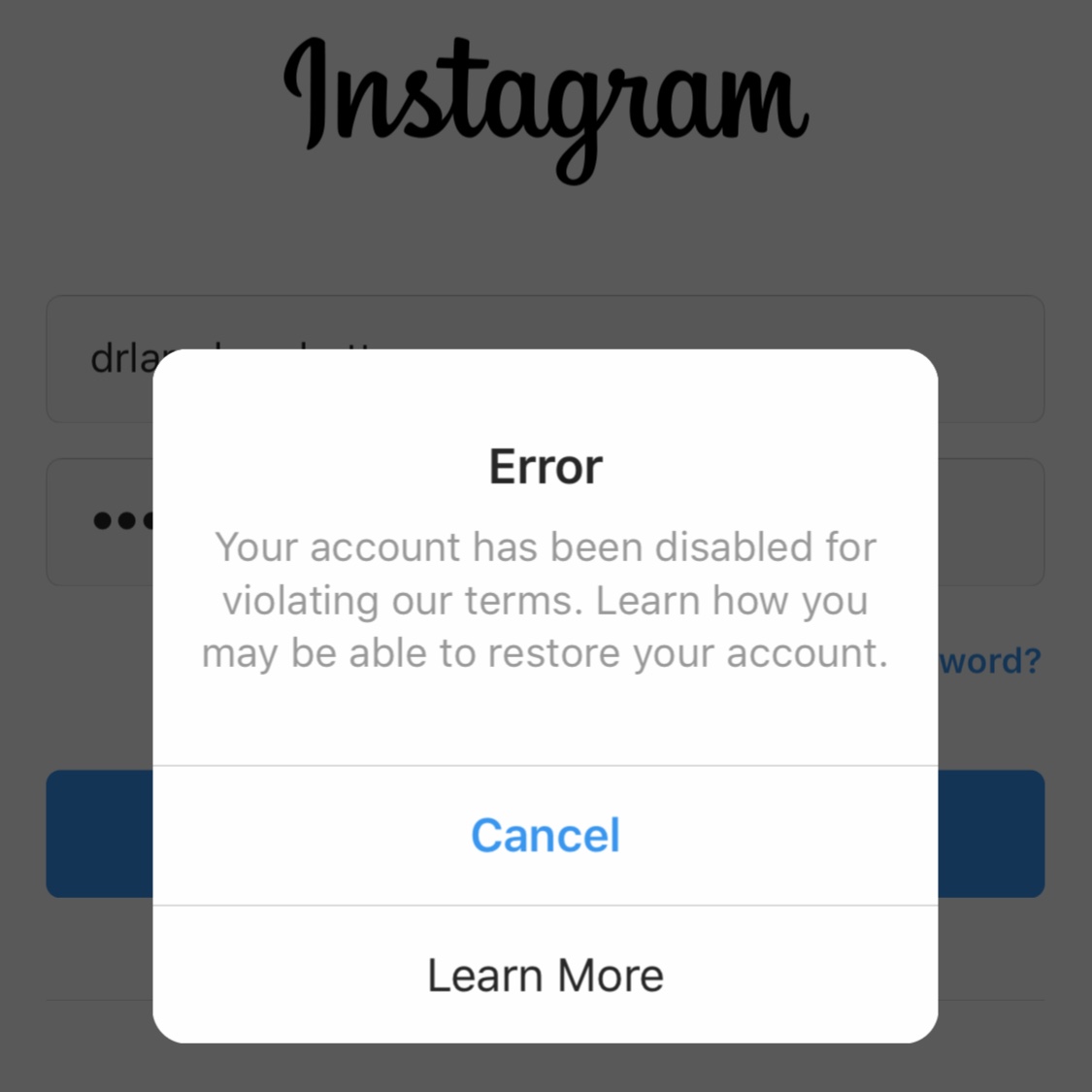 My IG account was down from April 22 to June 29. Many of you have asked what happened, so here’s the story. I hope it may help anyone who happens to suffer the same unfortunate fate.

Just after April 22 (I don’t remember the date), I posted a graphic video of me draining the distended fluid filled belly of a patient with end stage alcoholic liver disease, and the post blew up. Up until then, I had a post shared like 5 times, that liver draining post was shared like 800 times. And then my IG was taken down, my username wasn’t found when you searched for it.

When I went to login, I got the error message that my account had been “disabled for violating our terms,” the first pic in this post. I wasn’t sure what I did wrong, so I clicked “Learn more.”

“DISABLED FOR PRETENDING TO BE SOMEONE ELSE”

When I clicked on learn more, I got: “Your account has been disabled for pretending to be someone else.” That’s ridiculous and simply not true, I’ve always posted my stuff as me. Just beneath that, it read: “If you think this was a mistake, please let us know.”

Ok, good. This thing happens by mistake, and IG has a way to fix it, I thought. Yes, it was a mistake. I was always me on that IG, so I figured this misunderstanding “mistake” should be cleared up in a couple days.

After I filled out their form (picture below), I got a popup informing me that I “should receive an email response shortly.” That made me feel good.

WHEN I GOT NO RESPONSE

Then, nothing happened. They never sent me an email response. Not in 2 months.

After a couple days of nothing, I started to research it online, posted to my fb page, starting to get worried. I had built up nearly 20,000 followers in over 2 years–this was something worth fighting for, not to mention the content I had worked hard on developing. There’s a social media story there that I wasn’t ready to let go of.

That, and I did nothing wrong.

I filled out that appeal form everyday for 2 weeks, sometimes more than once a day. Nothing.

I contacted a social media lawyer, who proposed mailing Facebook (who owns IG) some nasty letters for a hefty fee, but said it probably wouldn’t get my IG back. I talked to a PR team, who said for $1,000 they could make me a wikipedia page in order to try to get verified, but that too wasn’t for sure that it would even get me the verified check box, nor would it get my account back.

I just wanted the thing turned back on.

I had several people who had worked with me in the past to run the IG, including 2 social media professionals, managers, more PR. Nobody knew how to get this thing back up.

I freaked out. Sad. All gone. Not only the loss, but the confusion of why. I was thinking about starting another one, but if one person just has to claim that it’s not me even when I have 20,000 followers, then it would certainly happen again when I have 100 followers. That thought–was depressing.

Don’t get me wrong, I enjoyed the break from IG. I do have a hate hate relationship with social media, but know it’s important to reaching people and making a difference, so I’m committed. I also liked the idea of burning the last IG to the ground, both to start over with more genuine followers (clear the lot) and hide some of the many embarrassing model like photos that previous teams convinced me would be good for the brand.

But I still wanted it back.

OTHER IDEAS TO GET MY IG BACK

A business friend advised me to open a facebook business account and say I had $75,000 to spend on marketing through my IG, if I could only get it opened back up. That ought to get someone’s attention with some power over there. Lying is not my style.

Another suggestions was to open a facebook ad account, which would get me access to a chat option with an actual human being. Maybe they could help me. So I did, I spend $10 on an ad, boosted one of my posts, and was able to actually chat with a human being. Once again, however, he said the only thing I could do was fill out the appeal form. Remember that form? That’s the one I was previously filling out once a day, but by now 6 weeks in and panicked that it was gone forever, had jumped to filling it out like 5-10 times. If insanity is doing the same thing and getting the same result, then what is doing even more of the same thing? Ya, well that’s where I was. Beyond desperate, frustrated and hopeless.

Now, from the chat there was a small bit of hope. He had given me another link to do the appeal. It appeared to by the same appeal form I had filled out on my phone (pic 3), so I filled it out again, for the 190th time. But this time…

I FINALLY GOT AN EMAIL RESPONSE

I got an email response. For the first time. They asked me to verify my account by taking a picture with my name, the account name and number they provided me. I did this, and sent them what they asked for.

Thank god! Finally, justice would be served, I would get it back up. My faith in the world is restored. Facebook is not the devil, they care about the little guy like me, and don’t just have useless automated protocol customer service in place to save money.

Except I never got a response from that email. So I emailed them back after a week or so, asking for an update. No response. Then I went psycho again and emailed everyday for a while. Again, my version of more insanity still didn’t work (seriously when does that do anything but make you nuts).

It appeared, by all accounts, that normal channels, and everything I could think of, didn’t work. I jumped back on the chat again, explained everything, but all he could do was give me the same appeal form. Lame.

I was out of luck.

HOW I FINALLY GOT MY IG BACK

Then I did something I know not everyone can do, and it solved the problem. I contacted a friend who worked at Facebook, pretty high up. She put me in touch with another woman, and within 12 hours the account was back up. She couldn’t tell me why it was taken down in the first place.

WHAT WOULD I TELL SOMEONE GOING THROUGH THIS RIGHT NOW?

I would first try the regular channels, the appeals, including the online link, which was the only thing I had any success with. That link is below:

Then I’d start searching your contacts for someone who works on the inside of Facebook. I wish their appeals process worked better, but it just doesn’t. They probably get countless requests like this to deal with–if I were them, I sure wouldn’t want to sort it out, and a phone number would be an invitation for headaches. But overall, I was pretty disappointed with their ability to fix this problem. And am nothing but lucky that I had a friend who was nice enough to help me out in that pinch. Thank god for her. No, I’m not giving you her contact info.

WHAT ELSE WOULD I TRY?

Writing a letter. Like a lot of them.
Going to the Facebook campus in person (no idea if this will do anything, but why not).
Writing a blog and slamming them, telling friends to share the blog continuously until you get some attention to get the issue resolved.
Tweeting Zukerberg.

SO WHY WAS IT DEACTIVATED IN THE FIRST PLACE?

I suspect it was because of the graphic nature of the post of me draining the belly of the alcoholic man. There is certainly a privacy issue, but I protected his identity in the video, didn’t show his face, and he consented to me taking the video, so that wasn’t an issue, although I wonder if someone wasn’t upset by this, and hit the flag button. That doesn’t make sense, though, because as pic 2 shows, they said it was deactivated for pretending to be someone else. Doesn’t make sense.

Or maybe they did that because it was too graphic, although I’ve seen worse, and they can put the blur on the pic if it’s that bad.

I’m not sure why the account was taken down, but when I finally got it back up, that liver post had been removed, which makes me think it was something about that post that, when it got on enough eyeballs, was taken down.

I will post it again, but not until I’m protected by that verified button.