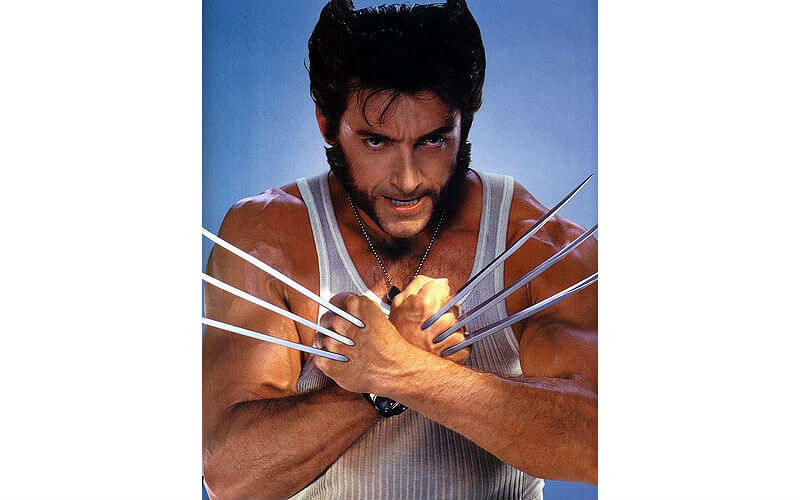 Want Wolverine’s Body? How to Focus on Attainable Goals Instead

I have some insider info for you. Since getting into fitness and television, I’m just beginning to see how things really work in the real world in a way I was naïve to before.

A friend of mine took a modeling gig doing before and after pics for a supplement. Guess when the “before” pics were taken? Within a couple days of her giving birth!! When she was bloated with pregnancy weight around her belly and hips, and of course she looked exhausted. For her, this weight came off within weeks just by breastfeeding, and she topped off the weight loss with a little diet and exercise after that to enhance the effect of the “after” pics — WITHOUT EVER USING THE ACTUAL SUPPLEMENT that was being advertised with her “before” and “after” pics.

It’s shocking when you first learn of this, and I imagine we are all somewhere between naïve child and awakened adult when it comes to the promises and marketing tactics of the $122 billion supplement industry. Photoshopping away reality isn’t limited to supplements; you don’t have to go far from advertising and magazine covers to Instagram to depart planet earth for some fantasy version of reality that’s seemingly everywhere but really nowhere at the same time. Unicorns are pretty, though, I’ve heard.

I actually looked up the word expectation: “a belief that someone will or should achieve something.”

I’m going to translate that into 2 parts for our purposes: A) something that should happen (we ought to look like a runway model or NLF athlete) or B) something we think will happen (I will get jacked with this six-week shred program). That’s a pretty good scam by the industry if we can be convinced we should look like something (Photoshopped perfection) that doesn’t exist for anyone. Because, then, we will keep coming back to buy more product, chasing that pot of gold at the end of the rainbow.

Illusion. AND unrealistic expectations that you will get ridiculous results from anything (like 30 pounds in 30 days) other than actually putting in the work and doing it right day-in and day-out over time.

Gentlemen, this message is not just for the ladies. Do any of us aspire to be gladiators or have bodies that may not be the most realistic expectation? Or expect that by taking “x” supp or doing “y” six-week shred program that we will get to have sex with Tom Brady’s wife’s girlfriends?

Well, I do. I can admit it. I want to look like Hugh Jackman — jacked “Wolverine” Hugh Jackman. I’ve included pics of him on my vision boards (and not paparazzi pics where he looks normal on the beach — my vision board pics are vein-popping, claws flared, about-to-cut-somebody’s-face-off ripped Hugh Jackman pics). I genuinely respect how he got into incredible shape to play Wolverine; I loved that he lifted heavy, including the video of him deadlifting four plates (400 pounds — check my Instagram @DrLarryBurchett where I’ve reposted it). You can track how he built his body into that physique over a decade. It’s inspirational.

Even Blackbeard does dead lifts. Training with @davidkingsbury #180kgs #PAN

He has mentioned it took him years to get there. He worked out three hours a day and, to get into Wolverine shape, ate 4,000 to 6,000 calories to bulk up before reducing calories to shred down (lower his body fat). This culminated in dehydrating himself for over 24 hours to tighten his skin, make his muscles pop and veins bulge in the 2013 movie “The Wolverine.” There’s a particular scene in that movie in which he’s absolutely shredded and a lot of bad guys died.

I’ve got some bad news for myself. Lorenz, baby — not going to happen.

Spoiler alert — when I look in the mirror, I don’t see a Wolverine physique (as much as I do imagine adamantium claws firing out of my knuckles when I’m angry). Despite a decent diet and regular weights and cardio, I’m not even close. Shit, I’m more like the 5-foot-nothing, 100-and-nothing “Rudy” plan. And I’d be lying if I didn’t admit on some level disappointment. What do I have to do to look like that; why isn’t this working? On and on with the crybaby shit.

Dude. You don’t do what he does. You don’t workout three hours a day, six days a week, or eat 6,000 calories a day.  Ever. Of course you’re not going to look like that. You’re not paid to — for movies, or magazine covers, or competitions. You have a job and a daughter, and you don’t do ’roids, growth or freakazoid potion No. 9 (no idea if HJ did or not).

If you really want to, then do the diet and training. Period. But, until then, the comparison isn’t fair (in fact, comparing yourself to others is actually a solid way to foster unhappiness). And having that body as a goal is unrealistic (unrealistic goals are also excellent to make a man unhappy). Basing any part of your self esteem on looking like that is guaranteed to make you feel bad and like a failure. Both comparison and unrealistic goals are a great way to be MISERABLE.

Fellas, let’s not do that.

On the other hand, let’s talk about a couple things, just the opposite — that point in the direction of happiness and achievable muscle mass, like comparing yourself only to yourself, and pursuing realistic, meaningful goals. The classic SMART pneumonic is a good place to start — that a good goal is Specific, Measurable, Attainable, Realistic, and on a Timetable.

So, my goal of turning into jacked Hugh Jackman in six weeks working out an hour a day—naw, dawgg! On the other hand, trying to lower my body fat percentage by two points in six weeks — that is something I can do and feel pretty good about when I do it.

This is just pure beast lift. Nothing more caveman than just picking up weight. I have to be cautious, as I was in a serious car wreck in high school, and still have a screw in my sacrum. I’ve overdone it before on deadlift and had a sore back for a week. But little by little I’m pulling more and more. Surprisingly, if I don’t do deadlift or low back weights, my back gets sore. If I do too much, I can overdo it. There is definitely a sweet spot of keeping it active and strong vs too much (back pain). Also, core work (abs and hammys) help my low back pain. If you have back pain, I would caution about deadlifting–consult a trainer or your doc before beast lifting.

What happens when we choose small achievable goals and focus on them? We actually experience the success of hitting a goal more often, and feel good about the accomplishment and the power of being effective. Half of the trick is picking something you know you can do and then doing it over and over. If you have to lose 100 pounds, setting five-pound goals means you get to celebrate 20 times on that road, instead of beating yourself up everyday for not losing 100. You feel better, self esteem higher. Happier path, man.

For years, I have seen unrealistic expectations and goals make my patients miserable. Most commonly, they want to lose all the weight as soon as possible. That’s normal to focus on the big number, the Grand Slam trophy. And one of the first things I do is break it down into bite-sized realistic goals that we can handle one step at a time.

No comparisons to others.

You’ll feel better. Chances are, you will look better in the end.

And when they call you to pay you to work out hours everyday to be Wolverine Jr. (I’m so ready) and date Alexandra Daddario, you’ll know exactly what to do.

Invite me along, and have her bring a friend.