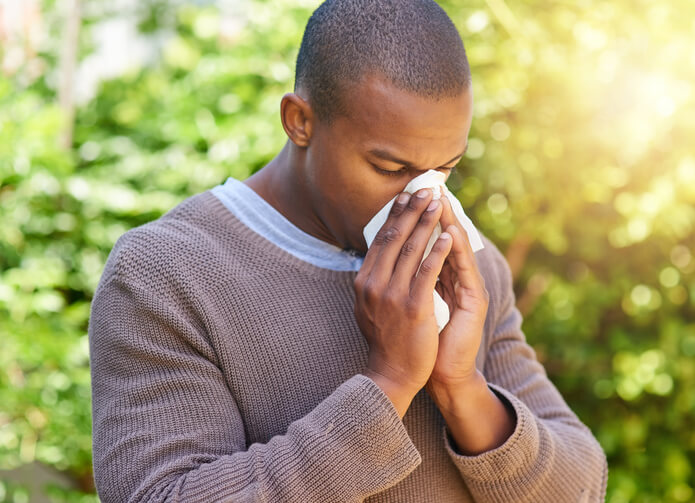 Spring 2017 has seen a dramatic increase in the severity of the symptoms of allergy sufferers throughout California, as well as the number of people complaining of allergies. Why?

In California, 2016’s mild winter and 2017’s unseasonably warm, particularly rainy spring brought early-blooming plants — and with it, pollens and allergens. Those who are routinely affected by allergies noticed these unwelcome changes, and those who don’t typically suffer from allergies may have experienced symptoms for the first time this year. So how can you treat allergy symptoms?

What To Do If You Suffer From Allergies

The two most commonly-affected parts of the body by allergens are the nose and the eyes. Anyone who’s suffered the sniffling, sneezing and red, watery eyes of spring and summer may feel desperate for some relief from their allergies! Nasal symptoms typically include:

Dr. Larry recommends using a nasal steroid spray regularly to reduce nasal inflammation and treat the affected area most directly. He often prescribes Flonase for his patients, but other nasal steroid sprays like Nasacort and Rhinocort can be effective treatments for these symptoms as well. Speak to your doctor about a nasal spray that might work best for you.

To relieve these symptoms, Dr. Larry suggests skipping over saline drops and opting for an allergy eye drop like Naphcon-A, which is available over the counter. However, he warns that this is only a short-term solution — using the drops for two weeks or longer can actually make eye allergies worse. If symptoms persist, Dr. Larry recommends that you talk with your doctor about a topical antihistamine like Patanol.

Again, talk to your doctor about prescribing you an antihistamine eye medication if the over-the-counter eye drops (used as directed) aren’t easing your allergy symptoms.

And while many allergy sufferers will reach for non-sedating oral antihistamines like Claritan and Allergra this allergy season, Dr. Larry says these treatments typically aren’t worth the money — though they may help occasionally, especially if allergies are severe.

Consider Getting Tested to Find Out What You’re Allergic To

There are two basic options for allergy testing: a blood test (called an in vitro allergy test) and a skin test (where allergens are injected under the skin to monitor for reaction), with the skin test being the better of the two, according to Dr. Larry. These tests can help you and your doctor identify your specific allergy triggers, including:

If you have severe allergies, or if you want to know more specifically which allergens in the environment you are allergic to, you might consider talking to your doctor about getting these tests done.