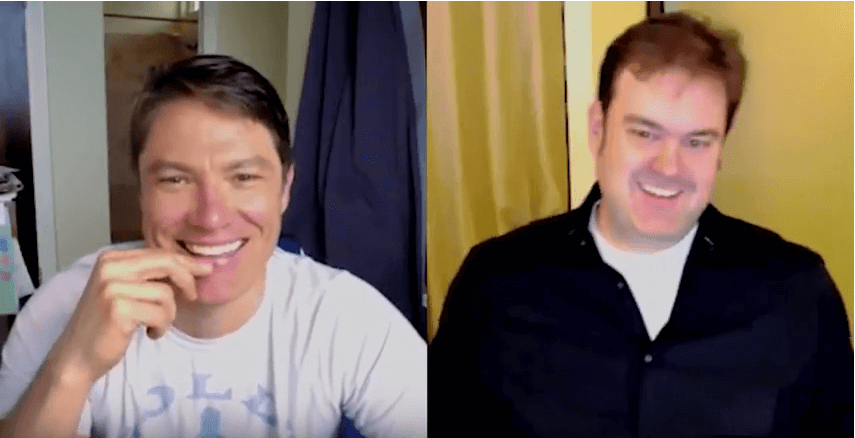 Why Losing Weight is About More Than Counting Calories: John’s Story

In the interview below with my friend John, we talk about how he has been able to lose 50 pounds over about a year and a half and what has been most instrumental to him to losing that weight. And, while calories-in and calories-out are part of the equation, what I love about this interview is that we don’t even much talk about meal plans, calorie counts, carbs or macros. We go much deeper.

I’m talking about things like addiction and depression. Self-hate and self-love. Resilience and picking ourselves up from failure. Becoming aware of our own destructive patterns and cycles — and how to break them.

I admire that John had the balls to go there in this interview and talk about what I would call “real shit.”

It ain’t pretty. You don’t much see it glistening on the oily photoshopped cover of a men’s fitness magazine or some perfect Instagram post. This stuff probably isn’t going to keep up with the Kardashians. But it walks in my ER everyday, and I want to talk about it because THIS is what’s really going on underneath adipose.This is where the action is — the biggest opportunity for growth, for real change, and to really make the most progress getting where you want to go. God, I love this shit.

1. PICK YOURSELF BACK UP

In answering why he lost 50 pounds, one of the first things John talks about is how he has shortened his cycle of setbacks. Previously, he would make some changes, lose some weight, and then, when slipping up, he would totally fall off the wagon and take many steps backwards, losing whatever ground he had made with weight loss.

So, one of the things he credits to being able to move forward is “shortening the cycle.” Notice he didn’t say that he’s perfect or that he doesn’t make any mistakes. Rather, he gets over it. He accepts he won’t be “perfect.” And, most importantly, when he slips up, he doesn’t go off the deep end, fall off the wagon and go on a Dunkin Donuts binge marathon. More quickly than before, he hops back on that pony.

At first glance, this may seem obvious: Get back up when you fall down. But studies have shown (and John is right on to focus on this) that those who struggle with long-term habit change like weight often think in very black and white mentality. A bite of a cookie turns into housing the whole bag of Oreos. Because all is lost. In reality, 50 calories won’t really make or break you. But 500 extra sugary calories is a lot harder to overcome (personally, I’ve always licked the white middles, myself). Those who are more successful, on the other hand, are more quickly able to get back on track, instead of sliding into no man’s land of the failure binge.

You can see how, for John keeping 50 pounds off and still losing weight, that can make a real difference. There will inevitable be slip-ups in time. How is it best to handle them? Not beat yourself up and get back on the wagon as quickly as you can.

For him, the quicker he gets back up, the more progress he will make in time. This realization was incredibly insightful.

That’s a great place to focus.

This (Spring 2018) isn’t the first time John has been in the 260s, having started around 320 the Fall of 2016. Last fall, in 2017, he was also around 260 but then slid back about 20 pounds over the winter. I suspected the holidays and was curious if there was any specific trigger that tipped off the slide.

He had to courage to just say it: depression. He’s been working with a therapist and, sometimes, he just gets depressed. Sure, some factors do add up, like less sun in rainy Seattle winters (seasonal affective disorder is a real thing — the blues in dreary winters). And John was traveling a lot: out of his routines and healthier eating habits at home.

But he didn’t cite those excuses; he admitted depression. What a man. Respect. There is so much stigma still attached to depression; it’s hard to admit, and too easy to feel like there’s something wrong with you if you are depressed. He mentioned how he worried he might be weak if he acknowledged he was depressed. Again, in reality, it takes far more strength to work through accepting this. And for him, that was most of the victory — accepting and understanding that sometimes he goes through lows and downs. Periods that beforehand, when he was not aware of what was going on, he would self-medicate those down feelings with food and alcohol (a CNS depressant) that might make you feel better in the short term, but neither of which make anyone feel better for long — and a downward cycle begins… 20-something pounds later.

The biggest step in progress for him is just to be aware of it and break that cycle of medicating in unhealthy or maladaptive ways, — in his case, food and alcohol. Luckily for him, it stops there. As a doctor over the years, I’ve seen others medicate with drugs (cocaine, meth, prescription opiates or Ativan), sex or even some work — it can be unhealthy and extreme (workaholic).

How do you self-medicate? Are there healthy or unhealthier ways you do this?

Awareness of the pattern, of how you are feeling and how you self-medicate is often the key, not just the beginning. Once you become aware, you have so much more power to choose your response. You can anticipate and be ready for it, with better coping mechanisms.

Deep shit, man.  I wish this was more mainstream, to reach more who need to hear it.

I’ve written before on the focus on adding habits one at a time, as opposed to changing your whole life, diet and starting a dramatic new exercise routine all at once. One at a time.

But the real antidote to feeling overwhelmed and coping with life? Put it on autopilot. Remove the burden and energy of the decision making. I’m talking, of course, about habits. Building and using habits to build the life you want via your daily lifestyle.

John talked a lot about these as well. They are protective against the slides back to losing ground. I had to laugh when he mentioned the satisfaction of doing a load of laundry; I would never admit it, but it feels incredibly empowering to clean my room. I installed some nice closet furniture years ago, one of the most satisfying purchases in a while. This ain’t sexy Lamborghinis we’re talking about here folks, but habits are indispensable to success and happiness. Got one you want to start working on now?

I like the analogy of building, like building a four-story house, or Trump Tower, depending on your ego. One level at a time. Building habits, spending time developing them, then moving to the next level. The great thing about when you figure out how to lose weight or build muscle is that, once you learn how to do it — which is basically developing a set of habits (diet and exercise) toward that goal — you can select it, put that autopilot program on, then just sit back and wait for the results to come in. Once you put it on habit autopilot, it’s so much easier to run. It’s the BUILDING that takes time and effort.

Which is why I suggest only building one specific habit at a time, in any particular area of your life.

These three are all related: habits of taking care of yourself, of picking yourself back up, of self-medicating in a healthy way. Sure, weight loss, getting in better shape and health, and looking better — these are great things.

But self-mastery, the discipline to build habits to create yourself and the life you want — the possibilities here excite me even more. In my experience working with people, success in this realm often very naturally carries momentum over into other areas of your life. Men get in better shape, feel better. Go for more at work, want to pursue dating, sex and relationships.

All good things and so much more than just your pant size.

To lose and keep off 50 pounds, John has certainly been in a calorie deficit, eating healthier foods, etc. Diet and exercise are essential.

But to get what he really wants out of weight loss — self-love, to take care of himself, so he can live the active life he wants — he’s had to dig into the deeper levels of his destructive patterns: depression and self-medicating with food and alcohol. Working down there has made him stronger, in addition to slimmer.

One of my favorite quotes from him this interview: “I owe it to myself.”